Is The Licorne Bike Effect Mountain Bike The Full Package? 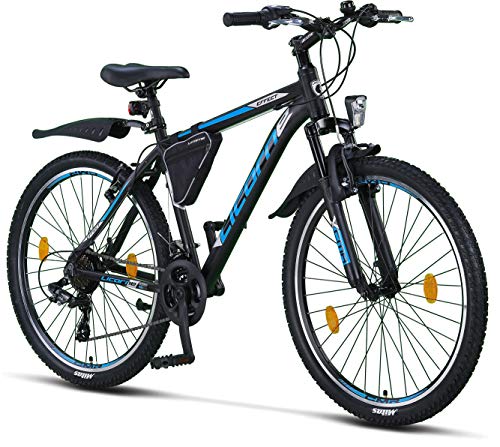 While many brands will focus on suspension or gears, or perhaps attention to detail in the geometry, here the emphasis is on the accessories.

It is clear that this is a full kit, and the specification still looks pretty good. So, does this bike offer the full package?

The Pros and Cons of this Licorne Bike Effect Mountain Bike.

The stand-out selling point of this Licorne Bike Effect Mountain Bike is the accessory kit – although the specification is pretty good too.

Few bikes come with as many accessories in the box as this mountain bicycle. It comes with front and rear lights, reflectors for the wheels, a frame bag, mudguards, and even a bell. The bag is not the biggest but it is still a nice touch.

Once assembled, these elements give the impression of a bike that is ready to handle anything. It is particularly helpful for parents buying this bike for teens that have a specific image of a MTB in their head. This one looks ready for action pretty quickly. 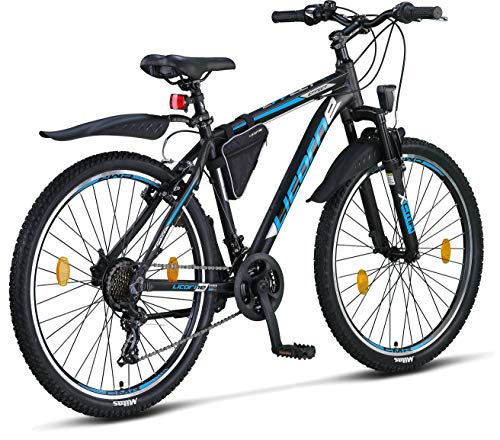 Of course, the specification helps here too. There is an impressive 21 speed Shimano gear system that provides more options than expected for a bike often bought for teenagers.

There is also a nice front fork suspension for cushioning and a light aluminium frame. That frame also looks nice with the right geometry for its purpose and an attractive black and blue scheme.

Be careful with the assembly process of this Licorne Bike Effect, and be aware that some parts may be faulty.

This bike comes 85% assembled and needs adjustments before use. While this won’t be a big deal for those that have built similar bikes in the past, there are reports of problems and those that have struggled.

One problem is that you will need to test out the pre-assembled elements to make sure they are fluid and to your needs.

Another is that some found that the accessories lacked mounts or that there wasn’t an Allen key. Aside from a possible need to swap out the brakes and seat, there isn’t much to say against this system.

Does this all mean that the Licorne Bike Effect 21-Speed MTB is a highly recommendable option?

There are some aspects to this mountain bicycle that might require some upgrades and you shouldn’t expect every single free accessory to fit perfectly or to be high-end. Still, there are plenty of new users getting a great experience out of this bike.

The specification, design and those nice added touches do combine to create something that can get teens and new riders excited. So, the Licorne bike is still a great choice.